From: The Blog Prof: Good riddance: Benedict Arlen Specter goes out in one final fit of self-serving bitterness

Turncoat Arlen Specter made his last speech on the Senate floor after getting broomed by voters in August (he lost the Democrat primary). It was likely the most bitter, self-serving and angry speech to close out a career that I have yet to hear from a politician as prominent a Specter. But it's fitting I guess for a careerist like Specter who stood on moving sand his whole career and finally got booted for that fact. Probably the most classless part of it was his calling out SCOTUS Justices Roberts and Alito as being activist judges. This from a guy who borked Bork so as to not overturn likely the worse activist SCOTUS decision of all time - Roe v Wade. 50 million lost lives later and counting. From The Washington Examiner via memeorandum: Snarlin' Arlen snarls his way through one final angry speech


...I watched his farewell address -- or as he called it, his "closing argument."

The former Republican and Democratic Senator showed why he was called "Snarlin' Arlen": His closing argument was an angry, petty, mean, self-serving screed that betrayed a total lack of self-awareness.

Specter began by singing the praises of old GOP Senate moderates, including Bob Packwood and Ted Stevens, both of whom left the Senate in disgrace under a deserved cloud of scandal.

Then he attacked the "activist" Supreme Court for infringing on Congressional prerogative -- this is the man who killed Robert Bork's nomination out of fear Bork would overturn Roe v. Wade. It's hard to think of a decision in the last 50 years that was more "activist" and trampled more on legislative prerogative, but Specter has called Roe "inviolate."

Speaking of Bork, this was where Specter showed his petty meanness. He gratuitously brought up Bork in his speech, saying, "Justice Bork -- excuse me ... Judge Bork."

And there was much, much more including his complaint that he was primaried in the first place. More links if you're interested (I'm not):


Yahoo! News: In final Senate speech, Specter slams political ‘cannibalism’. You read that right - cannibalism.
Doug Ross: Disgraceful political chameleon lashes out at Supreme Court
Ann Althouse: Arlen Specter accuses John Roberts and Samuel Alito of violating the oath they took at their confirmation hearing . This from the guy that definitely violated his oath to uphold the US Constitution.
Patterico's Pontifications: Arlen Specter: Damn This Democracy That Cost Me My Job
National Review: Arlen Specter Avoids an Uncharacteristically Classy Exit
RealClearPolitics: Specter: GOP Eating Their Own In Primaries Is “Cannibalism”. In case you want to see the video.
Power Line: Justifiable cannibalism
Ed Driscoll: Back and to the Left
HotAir: Specter's farewell speech: Primary challenges are like cannibalism or something

GOOD RIDDANCE TO YOU! 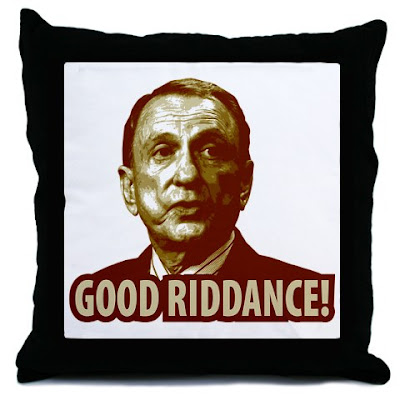