Game On: Michelle Bachmann Is For Real

Game On: Michelle Bachmann Is For Real 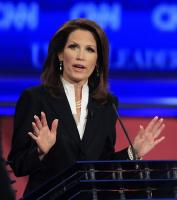 It is always quite amusing to hear the pundit class talk about the respective electability of the G.O.P. candidates for President. Sarah Palin is routinely ridiculed by the punditocracy largely because she's not part of the club. Last evening's debate was an intriguing forum with telling results. All of the candidates look good and no one made a fatal mistake. Here is my assessment of the candidates.

Herman Cain started strong and speaks forcefully on the economic issues,however he loses his step on matters outside his greatest strength. He lacked specifics for all his passion and that is something he is going to be forced to provide. He didn't lose support,but he didn't move the ball forward.

Newt Gingrich proved to be frustrating again. Had his campaign not recently imploded I suspect he would be included in the conversation than he is at present. Few people in public life demonstrate the capacity to strategically assess all the issues in a clear manner,but foot in mouth disease has permanently harmed him.

Ron Paul was Ron Paul, but he looked tired.

Rick Santorum is bright,articulate and passionate in his beliefs, but last night proved that he can project coldness in the midst of passion.

The loser of the debate was Tim Pawlenty. He had a good night,but he is remembered for not engaging Romney on "Obamneycare". In a year where Republican voters want to take the fight to Obama, Tim Pawlenty showed polite timidity.

The biggest loser of the evening was Jon Huntsman Jr. Why? Because he was invited to the debate, he declined and then promptly announced he was running today. How do you think that looks to New Hampshire voters? All the more clueless given reports that he will forgo an effort in Iowa.

Mitt Romney won the debate because he didn't lose. He was focused on the economy,he looked presidential and more importantly he did not appear to be the phony that emanated from him four years ago. He was in command of himself,confident and assertive. I'm not a Romney fan for many reasons, but he at least allayed some fears to a degree. Wait and see. If he is the nominee I want to see how he takes a punch first. If you get into the ring with Obama you had better not have a glass jaw.

The most significant result from last night's debate is the performance of Michelle Bachmann. She has been subject to ridicule and marginalized as a fringe or niche candidate. Not anymore. She was focused.She prefaced each response with her credentials justifying her response to questions. More importantly, she was credible.

When asked about Obamacare she reminded everyone she was the first to file for its repeal. When asked about Libya she referenced her service on the House Select Committee on Intelligence giving her just criticism all the more weight.

Michelle Bachmann did something I found quite profound and has to my knowledge gone unstated anywhere. Pro Life candidates are often criticized by pro choicers as being unconcerned about a child after its born. Michelle Bachmann when asked about abortion reasserted his pro life position, but prefaced it by informing people of her five children and twenty three foster children. Many took this as just personal fluff, but the truth is how can anyone accuse Michelle Bachmann of being a hypocrite on abortion when she's taken in 23 foster children? How do you criticize one who has sheltered children from the storm?

Michelle Bachmann is for real folks and I look forward to the campaign with renewed vigor.
Posted by Kevin at 4:57 PM